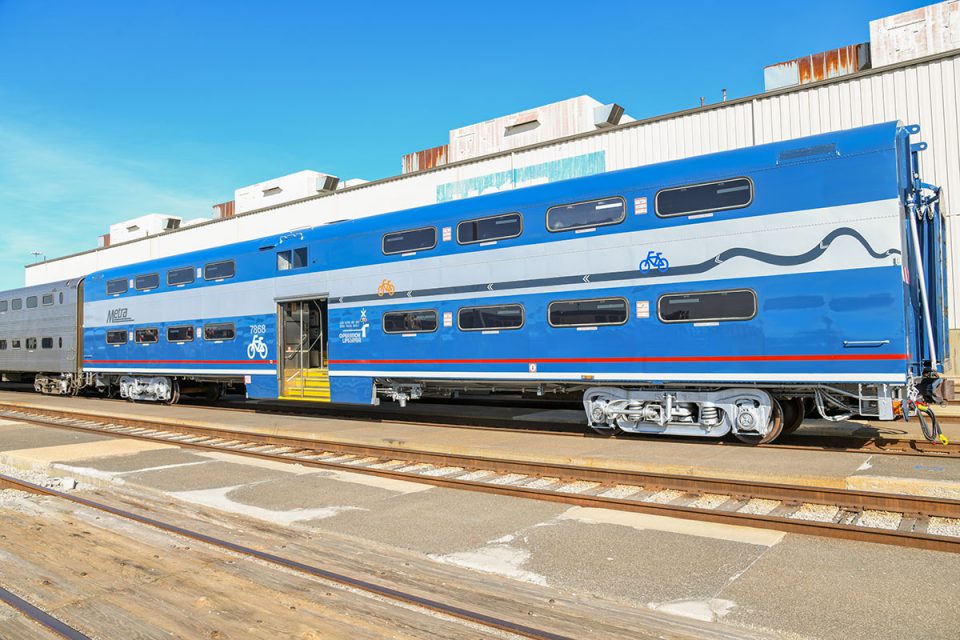 Metra has introduced two Bike Cars on the Milwaukee District North Line between Fox Lake, Glenview, and downtown Chicago. The first car debuted last month, and with the second car in service, it will allow more trains to feature the cars.

The Bike Car is easily identified by its blue and grey paint scheme, as well as a large white bicycle decal adjacent to the exterior doors. Metra will post alerts to metrarail.com should a service disruption cause the cars to be out of service.

Metra chose the Milwaukee District North Line for the pilot because of the number of cyclists and reverse commuters who already use the line. The line is also close to a concentration of forest preserves and trails, such as the North Branch and Skokie trails.

The new Bike Cars, along with Metra’s already-in-place bikes on trains programs, allows non-motorized, two-wheeled bicycles and e-scooters on board. All other forms of bicycles are not permitted. For more details, check out Metra’s Bikes on Trains program information. Note to bike riders, once onboard, cyclists and e-scooter users must secure their bike or e-scooter to one of the bike racks with a bungee cord or other device that they must provide.

To accommodate the additional bicycles, Metra crews removed 24 two-passenger seats on one half of the lower level of Pullman cars from the late 1960s. Seats remain on the upper level of that side of the car for customers who wish to sit within view of their bike. Metra used in-house resources to design and retrofit the car.

Metra has also temporarily relaxed its bikes on trains policy and is allowing bikes on all trains across all 11 lines. There will still be limits to the number of bicycles allowed and cyclists should be advised there is no guarantee that bikes or e-scooters can be accommodated on an initial or return trip (particularly on rush-hour trains), and crews have the right to refuse bikes or e-scooters in the event of overcrowding or depending on the needs of customers with disabilities.

Over the next few months, Metra will gather feedback from riders and transportation advocates about the bike cars.