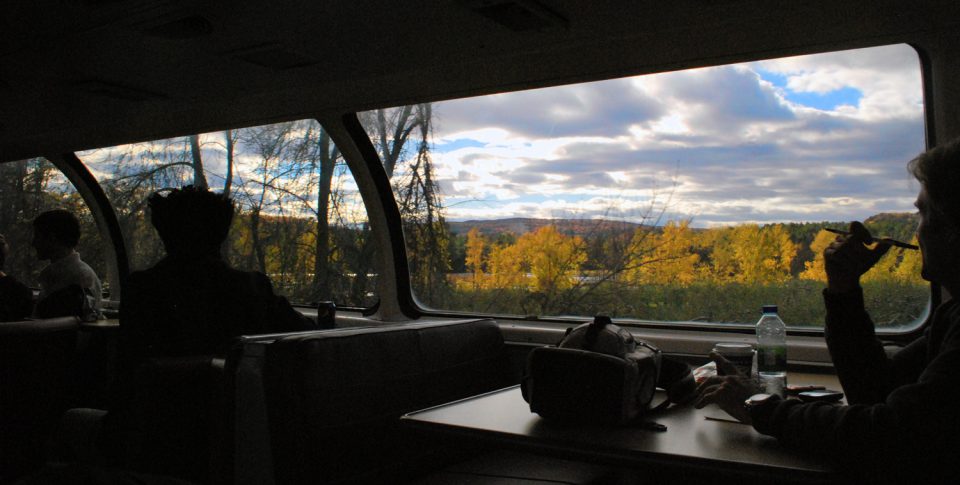 The autumn foliage in Upstate New York is quite spectacular in itself, but Amtrak is enhancing the experience by adding the historic “Great Dome” to selected runs of the Adirondack service between Montréal and Albany, New York for a six-week run September 24 through November 3, 2015.

The Adirondack provides daily service between New York City, Albany, through eastern Upstate New York and into Montréal.  Trains in each direction depart Montréal and New York City in the morning hours and take approximately 11 hours to traverse the route.  This fall, in partnership with the New York State Department of Transportation (NYSDOT) and the National Park Service Trails and Rails program, Amtrak brings its one remaining dome car back for this popular annual tradition along one of the most scenic train routes in the world.

Popular on passenger trains during the 1950s and 1960s, railroads used dome cars like the Great Dome to give travelers an added experience to view the landscape that their trains passed through.  Railroads throughout the western United States especially liked dome cars, including the Great Northern Railway.  Amtrak’s only remaining dome car was built by the Budd Company in 1955 for the Great Northern’s Empire Builder traveling between Seattle, Glacier National Park, North Dakota and Chicago.  When Amtrak began operations in 1971, the Great Dome was one of the cars the company inherited.

The car features an upper level with windows on all sides to provide panoramic views of the changing colors of the trees, sweeping vistas of Lake Champlain and breathtaking views of the Adirondack Mountains between Albany and Montreal.

The dome car will operate northbound from Albany to Montreal on Thursdays, Saturdays and Mondays and returns south from Montreal on Fridays, Sundays, and Tuesdays. Dome car trips are not made on Wednesdays. Due to tunnel clearances, the Great Dome does not operate between Albany and New York City. Passengers are welcome to enter the car and enjoy the view at no extra cost. Seats are unreserved and available on a first-come, first-served basis.

“The ‘Great Dome’ car is one of the best and most unique ways to experience the magnificent scenery along the route of the Adirondack,” said Kevin Chittenden, Amtrak Deputy General Manager of the Empire Service. “The car is a passenger favorite every year and helps contribute to the ridership and revenue growth that make this service so successful.”

Passengers can also take advantage of the I Love NY 15 percent discount off the regular (full) adult rail fare, valid for sale through May 2016. Advance reservations are required. In addition, up to 2 children ages 2-12 may accompany each adult at half the discounted rail fare. Details at Amtrak.com or ILoveNY.com.