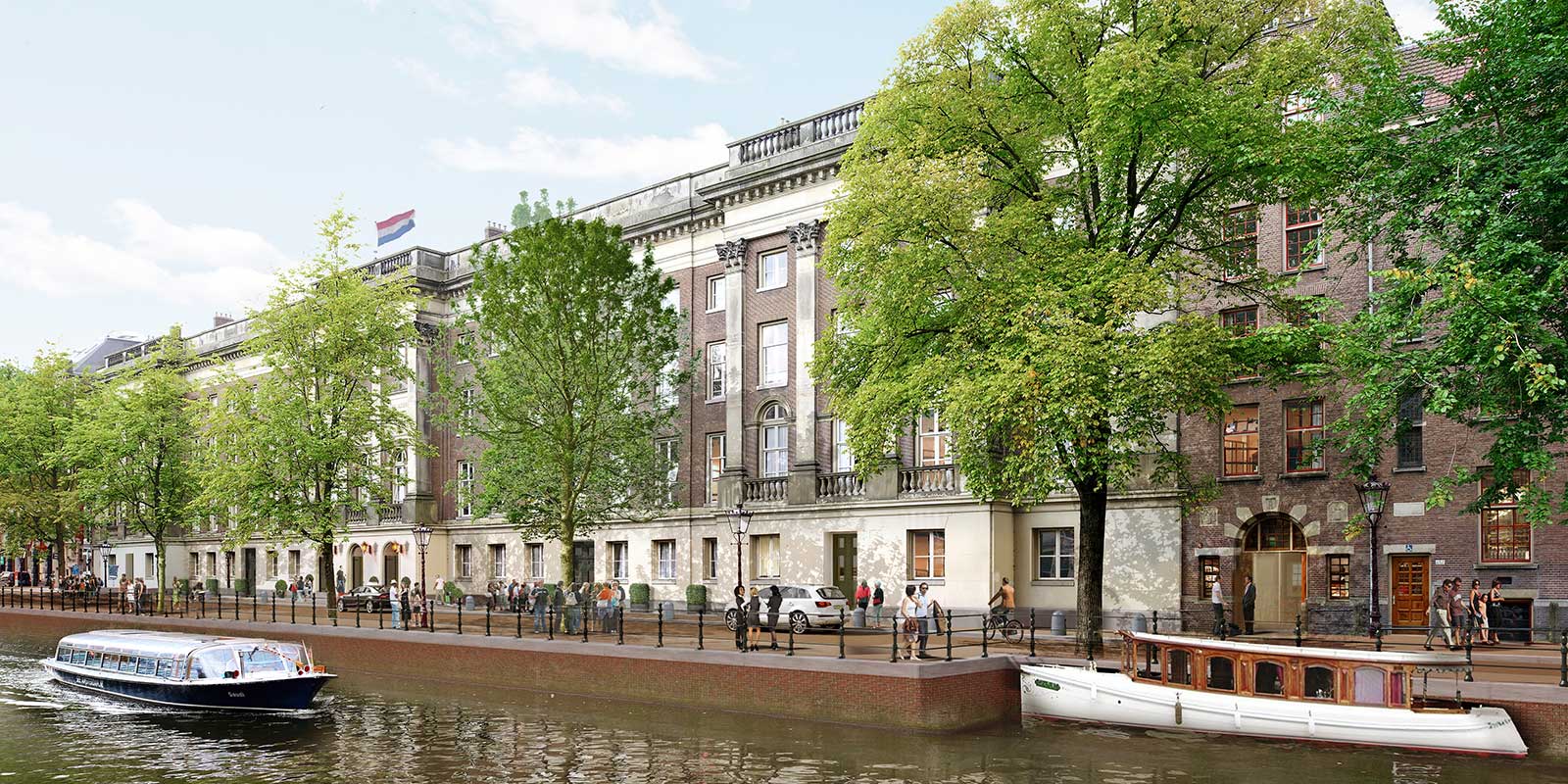 Coming to Amsterdam in 2023, Rosewood Hotels & Resorts will open its first property in the Netherlands, Rosewood Amsterdam. Housed in the former Palace of Justice, a building of great architectural, historical and social significance that overlooks the Prinsengracht (the Prince’s Canal), one of the city’s most beautiful waterways, in the UNESCO World Heritage-listed Amsterdam Canal District.

The hotel will be located near many of Amsterdam’s finest attractions including the museum district, the high-end shopping district on P.C. Hooftstraat, and the hip De Pijp neighborhood. With its central location and befitting design carefully conceived to offer an inviting and amiable atmosphere, the property is poised to serve as an unparalleled gathering place for visiting guests and the local community alike.

Originally constructed in 1665 and later expanded in 1836 by Dutch architect Jan de Greef, the Palace of Justice was Amsterdam’s main courthouse for over 175 years and one of the finest examples of de Greef’s classic, multi-cultural style influenced by his travels to Paris and Rome. Working closely with the Bureau Monumenten en Archeologie (BMA) and The City of Amsterdam to preserve the rich heritage and quintessential character of this iconic building, Netherlands-based architectural firm Kentie & Partners has been selected to spearhead the property’s evolution into an ultra-luxury hotel. Leading the property’s interior design is acclaimed Dutch designer Piet Boon, of Amsterdam-based Studio Piet Boon. Known for his ability to balance functionality, aesthetics and individuality Boon will honor the property’s original elements and distinctive Dutch identity while incorporating a contemporary sense of style that captures the energetic and exciting Amsterdam of today’s times.

Amsterdam-based Studio Concrete has been appointed to design the hotel’s main restaurant, which will become a fresh and vibrant interior in the heart of the building, flanked by two courtyards with outdoor seating.  London-based interior design firm Sagrada, led by David D’Almada, has been appointed to design an intimate bar in rich colors and high-end finishes, with stunning views overlooking the canal.

Rosewood Amsterdam will offer 134 guestrooms and suites, with many boasting spectacular views across the two adjoining canals, quiet internal courtyards and iconic townhouse rooftops.  Amenities will include three restaurants, one of which will be an Indian restaurant, and bars; Sense, A Rosewood Spa offering ayurvedic treatments; a state-of-the-art wellness and fitness center; and an indoor swimming pool.  In addition, multiple event spaces and meeting rooms, including a 3,000 square-foot ballroom, will offer advanced audio and visual services and natural daylight. Decorative details throughout the hotel’s public spaces will pay homage to the signature spirit of both the building and city while creating a selection of differentiated yet unified spaces through subtle albeit impactful means, such as contrasting color schemes that seamlessly separate one setting from another. Notably, the lobby lounge will feature a library adorned with beautiful legal books doubling as art pieces, photographs and artifacts, as well as comfortable and stylish seating, to create an enticing enclave that will invite visitors to linger and laze. The library will also host an Indian Business Club which will stimulate high-level business and networking in an exclusive setting. All public spaces will overlook the three distinct, internal landscaped courtyards of the building, imagined by renowned landscape designer, Piet Oudolf.Internationally renowned for his work on the High Line and The Battery, both celebrated New York City attractions, Piet Oudolf will use his extraordinary expertise to artfully varnish the property with lush gardens and outdoor communal spaces.

“Through design, décor, and service, Rosewood’s properties worldwide mirror their surroundings and the souls of the destinations, and Rosewood Amsterdam will be no different,” says Sonia Cheng, chief executive officer of Rosewood Hotel Group. “With a unique character and culture, Amsterdam is a fitting locale for which to bring Rosewood’s guiding A Sense of Place philosophy. We’re looking forward to combining the city’s quintessential charm with a modern sense of style to meet and exceed the latest standards of luxury hospitality.”

Lighting Vancouver’s Sky Up with the Celebration of Light

Mall of America Kicks Off the Holiday Season with 8...

The Empire State Building’s Holiday Experience Will Take You to...