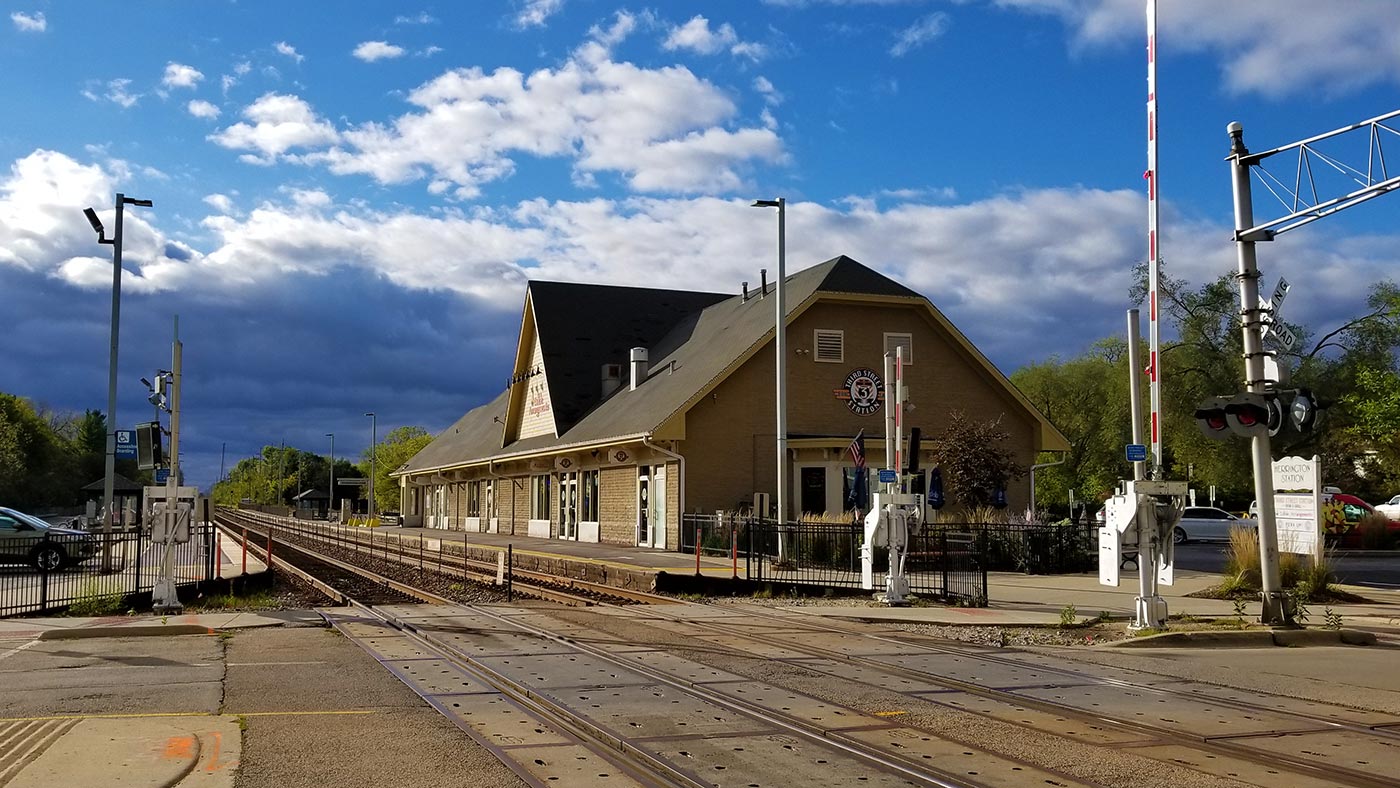 The reductions in Metra service due to the COVID-19 pandemic are having one positive side effect for the railroad. With fewer trains operating on our system, Metra is planning to get a head start on its 2020 construction program with several major projects beginning this week and next.

Metra and its railroad and municipal partners plan a comprehensive list of construction projects for 2020. The 2020 construction program includes starting construction on two completely new stations and the replacement of a 121-year-old bridge over Milwaukee Avenue in Chicago and a $28.5 million fiber optic project covering two Metra lines.

Work will also continue on multi-year projects to replace aging bridges on the UP North and Milwaukee District West lines and to construct new track segments on the UP West Line. However, the bulk of the 2020 construction program includes smaller infrastructure improvement and maintenance projects distributed across Metra’s 11 lines. Together, these projects will ensure Metra customers continue to enjoy safe and reliable service. Construction work got underway in late March and will continue through the fall, weather permitting.

“We plan to take full advantage of this service reduction to get a head start on the projects necessary to maintain our system,” said Metra CEO/Executive Director Jim Derwinski. “While we’d much rather be running normal service, we’re using this opportunity as best we can. By doing this, we hope to reduce the number of construction schedules needed this summer and may be able to finish some work more quickly than normal.”

A portion of the work is being performed by Metra’s in-house crews, who are dispatched to make repairs to stations and perform track work, as well as contracted construction firms for larger projects. Metra is also contributing funds for station repairs and upgrades that will be performed by a municipality or its contractors.

In Metra’s 2020 capital program, $241.3 million has been allocated for the types of construction projects included in this release: $51.2 million for station and parking improvements, $46 million for track maintenance and improvements, $22.7 million for bridge projects, and $34.2 million for signal system upgrades. Additional funding for some of the projects included in this release was allocated in prior years’ capital programs or came from outside sources, including municipalities and Metra’s freight railroad partners.

Timing of the projects listed below may change and, when warranted, projects may be added to or removed from this list. A map showing the location of each planned project can be found here.

Rock Island Line riders will also benefit from platform projects at 103rd Street and Tinley Park/Oak Park Avenue stations as well as a station facility rehab project at Blue Island/Vermont Street.  Metra plans to replace and expand the existing parking lot at the Homewood Station on the Metra Electric Line.

There will be seven station projects on the BNSF Line including platform work at the West Hinsdale and Westmont stations as well as work to replace the head house at Cicero, which was damaged in a 2019 freight derailment. Improvement projects will also take place at the Belmont, Brookfield, and Clarendon Hills stations.

On the UP West Line, platforms will be replaced at the River Forest, College Avenue and Geneva stations and work will begin on a multi-year project to build a new Elmhurst Station and pedestrian tunnel. The Palatine Station on the UP Northwest Line will also have a platform replaced and the Woodstock Station building will be rehabbed and new shelters will be added on the platforms.

Metra and its railroad partners plan to make improvements to 37 road crossings systemwide in 2020.

On the three Metra lines operated by the Union Pacific, a total of 16 crossings will be replaced this year. On the UP North Line, workers will replace crossings at 116th Street in Pleasant Prairie, Wis. and Maple Hill in Glencoe. On the UP Northwest, Hillside in McHenry County, Lily Pond Road in Woodstock, Hart and Cuba roads in Barrington Hills, Smith Street in Palatine, Route 83/Mount Prospect Road in Mount Prospect, Dee Road in Park Ridge and Sayre Avenue in Chicago will be replaced. Crossing replacements will also take place at Third Street and Western Avenue in Geneva, Wood Street in West Chicago, Sunset Avenue in Winfield, Addison Road in Lombard, and Haven Avenue in Elmhurst on the UP West.

On Metra-operated lines, 13 crossings will be replaced in 2020. Crossings will be replaced at 79th Street on the Metra Electric Line South Chicago Branch, 95th, 103rd and 111th streets in Chicago on the Rock Island Line and at Eastern Avenue and Cedar Road in Manhattan and 87th/Pulaski in Chicago on the SouthWest Service. The crossings at Oak Street in Fox Lake and Glenview Road in Glenview will be replaced on the Milwaukee District North Line as will the crossings at Central Avenue in Chicago, Addison Street in Bensenville and Oak Avenue in Bartlett on the Milwaukee District West Line.

Metra will replace 24,000 ties from Libertyville to the A-5 interlocker on Chicago’s west side on the Milwaukee District North Line. Another 10,000 ties will be replaced between 67th Street and 115th Street on the Metra Electric Line, 8,000 will be replaced on the SouthWest Service between 21st and 74th streets in Chicago, and BNSF will replace 11,000 ties and 165 switch ties between Cicero and Downers Grove. BNSF will also replace platform ties at the Hollywood, LaVergne and Naperville stations.

On the UP West Line, work will continue on multi-year projects to add eight miles of third track between River Forest and Geneva. When complete, bottlenecks that are a significant source of freight and passenger train delays will be eliminated. UP will also replace rail on curves near Great Lakes and in northern Lake County and near the North Avenue Bridge in Chicago on the UP North Line as well as complete other track maintenance projects between Evanston and Highland Park.

On the Milwaukee District West Line, Metra will replace multiple switches as part of the CREATE program’s B-1 project.

There are seven bridge projects planned on the Metra system in 2020 including the continuation of multi-year projects to replace century-old bridges between Grace and Balmoral streets in Chicago on the UP North Line and across the Fox River in Elgin on the Milwaukee District West Line.

On the Milwaukee District North Line, Metra will break ground on the replacement of a 121-year-old bridge over Milwaukee Avenue on Chicago’s northwest side adjacent to the Grayland Station. Metra will also build a new bridge at 43rd and Root streets in Chicago on the Rock Island Line and make repairs to a bridge at Vincennes Avenue while BNSF will replace retaining walls at Central Park and Keeler avenues in Chicago.

The 2020 construction program includes a $28.5 million project to install fiber optic cable on the Rock Island and SouthWest Service lines.  Wiring both the Rock Island and SouthWest Service with fiber optic cable will improve safety along the rails and at crossings by providing a more reliable transmission system for Metra’s signal systems; additional communications bandwidth that will allow us to install cameras at 300 rail crossings and the depots along both lines; a reliable transmission system for electronic platform signage and public address systems; and bandwidth for future improvements. Along with these safety enhancements, we expect to save more than $690,000 annually by eliminating monthly charges for modems, telephone lines, DSL and cable lines currently used for our communications system.

In addition to the fiber optics project, upgrades to the signal and communications systems on the Rock Island Line will be made at Robbins, Blue Island, Mokena, and New Lenox. The SouthWest Service will begin a multi-year project to upgrade systems between Wrightwood and Chicago Ridge.

On the Metra Electric Line, track circuits will be upgraded along the line’s South Chicago Branch and new electric substations will be built at 95th Street and Riverdale.

The A-20 interlocker on the Milwaukee District North Line will have new dispatching control circuitry installed for PTC and the interlockers at Grayland and Rondout will undergo renewal projects. In Deerfield, crossing signals at three intersections will be renewed.

On the Milwaukee District West Line, signal improvements will be made as part of the replacement of switches at Franklin Park for the CREATE program’s B-1 project. Improvements to the signal systems at crossings will also be made at intersections in Franklin Park and Bensenville.