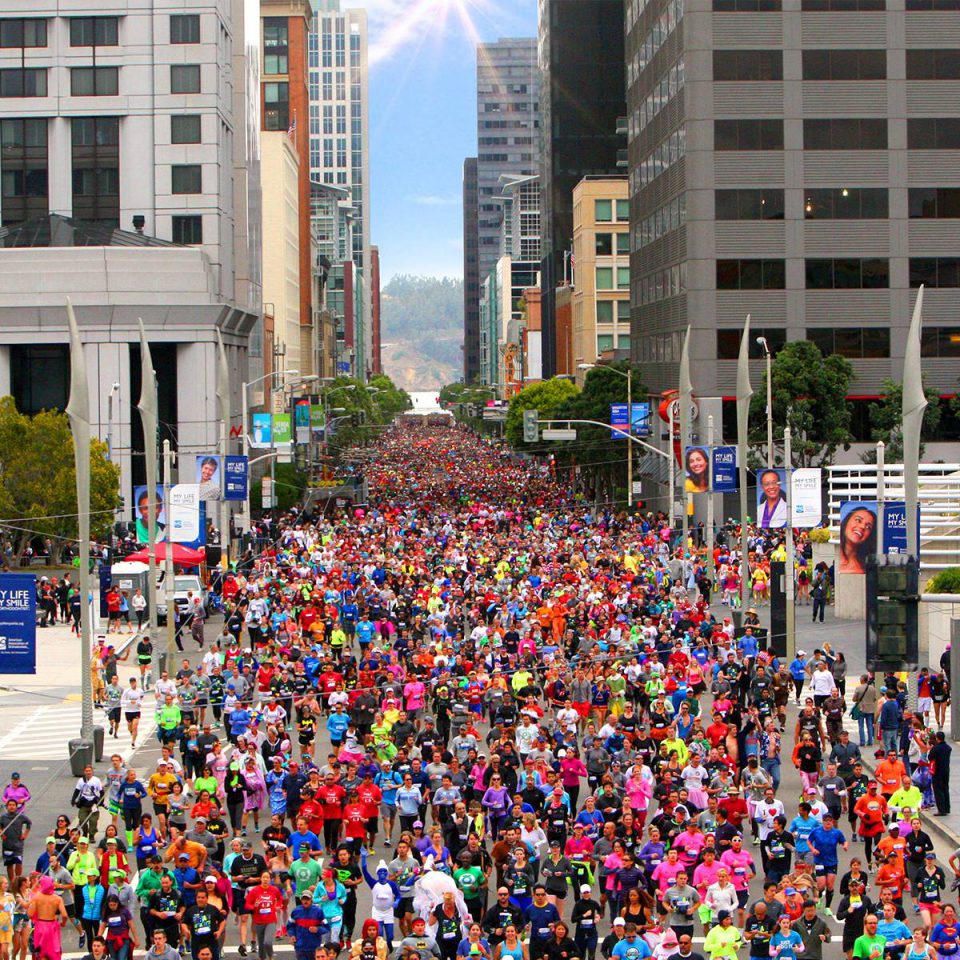 San Francisco’s Bay to Breakers is an iconic foot race that residents and visitors alike participate in year after year.  The 2016 race takes place on Sunday, May 15, 2016.  While some are in it for the seriousness of the run, many are in for the fun and hilarity that ensues each year.  The Zappos.com Bay to Breakers is a race built by the people.  Since 1912, over 1.8 million costumed runners, walkers and centipedes have completed the legendary 12K journey from the San Francisco Bay to the breakers on Ocean Beach.

The race runs west from the heart of downtown San Francisco, through the city and finishes at the Great Highway along the Pacific Coast’s Ocean Beach.  Participants run up the iconic Hayes Street Hill, along the Panhandle and through Golden Gate Park, while the city of San Francisco cheers them on.

There are a variety of registration options from single runners to centipedes and for adults and children alike.  There are a number of runners perks including a finisher’s medal, course entertainment and much more.  The race steps off Main and Howard Streets in downtown San Francisco on Sunday, May 15 at 8:00 a.m.

Participants are strongly encouraged to use public transportation to get to and from Bay to Breakers.  BART, Caltrain and San Francisco’s MUNI are all bumping up service to accommodate Bay to Breaker runners and spectators.

BART will start service earlier on Sunday and run additional long trains.  All BART stations will open early with service starting at approximately 6:00 a.m. on Sunday so racers can get to the race before the 8:00 a.m. step-off.  Trains running before 8:00 a.m. will run at 20-minute intervals.

BART encourages riders originating from Peninsula and San Francisco stations to get off at Montgomery Street Station. Riders coming from the East Bay should use the Embarcadero Station. Both stations are just a short distance from Howard and Spear Streets, the starting point of the race.

Individuals along the Peninsula and in the South Bay can ride Caltrain to Bay to Breakers.  There will be four extra pre-race trains to San Francisco and three express trains after the race to San Francisco.  The schedule is show below.

One-way and Day Pass tickets to the Zappos.com Bay to Breakers will go on sale starting May 12 at any station ticket machine. Just select the “Bay to Breakers” button. You also will be able to purchase a special day parking permit at the same time. Group of 25 or more save 10% by ordering in advance with a group ticket.

The starting line is about 1.4 miles from the San Francisco Caltrain Station at Fourth and King streets. Participants can walk to the starting line or take the Muni T-Third light rail.

Special trains will depart and pick up passengers only from the above listed stations. Regular Sunday northbound service departs San Jose Diridon at 8:00 a.m. After the race, three express trains to Belmont will depart San Francisco at 1:10 p.m., 2:10 p.m. and 3:10 p.m. and then will make regular local weekend stops to San Jose Diridon.* – Will be 10-car trains for extra capacity.

Bay to Breakers is an event not to be missed and registration is still open.  For more details, visit Zappos.com Bay to Breakers.  For transportation information, visit BART, Caltrain or MUNI.