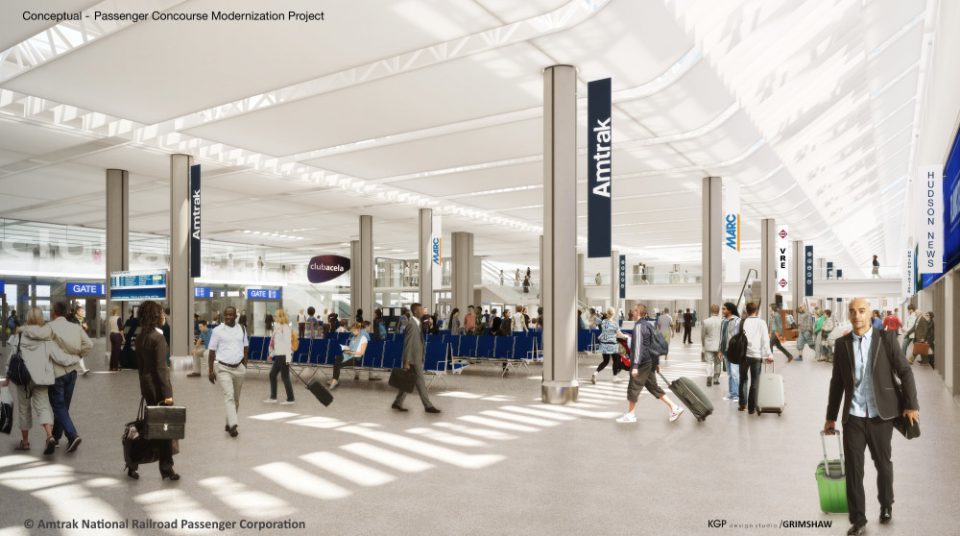 Design is underway to upgrade passenger amenities including new restrooms, boarding gates, seating and a ClubAcela lounge. The design will also include new architectural features and natural light elements to enliven the space for travelers. The result will be a vastly reconfigured, modernized and unified concourse that will improve the passenger experience by providing better accessibility, circulation, wayfinding and multimodal connectivity.  Amtrak today unveiled two conceptual renderings of the renovation.

While Union Station has served the region well for over a cen­tury, it is now operating beyond its capacity, particularly during rush hours and peak travel times. As such, implementing near-term solutions to gain capacity and alleviate congestion is imperative to maintaining safe and efficient station operations.

The Concourse Modernization project will be the first set of improvements to come to life as part of Washington Union Station’s 2nd Century plan, a comprehensive improvement initiative comprised of multiple projects – in coordination with the Union Station Redevelopment Corporation (USRC), the Federal Railroad Administration (FRA) and private real estate developer Akridge – which seeks to triple passenger capacity and double train capacity over the next 20 years.

“The advancement of this project is a significant milestone for Union Station’s 2nd Century plan,” said Stephen Gardner, Amtrak’s Executive Vice President of Northeast Corridor Business Development. “It will vastly improve passenger comfort and accessibility with a modern and reconfigured concourse area benefiting Amtrak, VRE and MARC passengers. This work and other planned improvements will transform Union Station’s capacity and performance, befitting the vital regional gateway and civic hub the Station has become since its redevelopment in 1988.”

“As our busiest Metrorail station, customer-focused improvements, including safety and accessibility upgrades, are critical at Union Station,” said Shyam Kannan, Managing Director of WMATA. “We look forward to working alongside Amtrak to implement these programs.”

Early action construction for Amtrak’s Concourse Modernization project will start spring 2016, including the relocation of heating and ventilation units. Phased construction is anticipated to start in 2017 and will seek to minimize impacts to all station users.

Built in 1907, Union Station is a critical transportation center in the Mid-Atlantic region. It is one of the most visited tourist attractions in the nation’s capital and serves as a hub for VRE, MARC and Amtrak plus Metrorail and Metrobus. Many tour bus and intercity bus services also use Union Station’s bus facilities. With approximately 37 million people passing through the station annually, planning for the station’s future remains at the forefront for station partners.  Separate from the Concourse Modernization Project, FRA is currently leading an Environmental Impact Statement (EIS) for the Union Station Expansion Project to review long-term redevelopment alternatives.

Baltimore lights up with Light City

Buy One, Get 50 Percent off Companion Fare on Amtrak in the Northeast